William has been counting down his birthday literally for months. For a while he just knew that it would happen after our friends left (on the 11th - they flew out of Prague), but about 2 weeks before he started counting down day by day. Our girls have never been this persistently excited about their birthdays but man, he just could not wait! 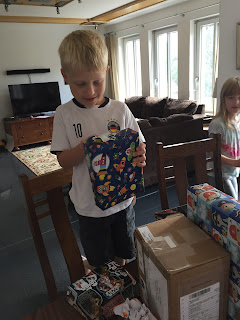 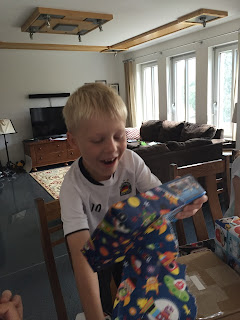 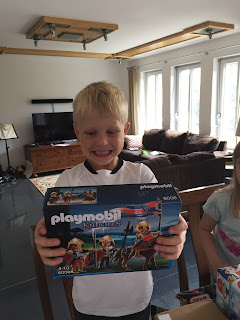 He had cried the day before because he said he only wanted Transformers and I told him that not all his presents would be Transformers. He changed his mind approximately 3,286 times in the last MONTH alone so I was kind've at a "you get what you get" point. Fortunately, you can tell by that grin on his face that it didn't matter in the end. He really loved ALL his presents! 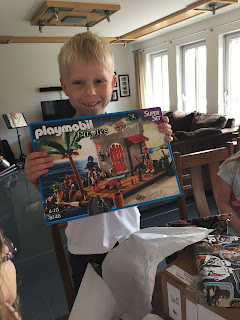 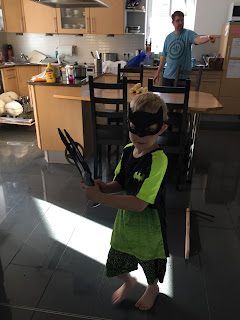 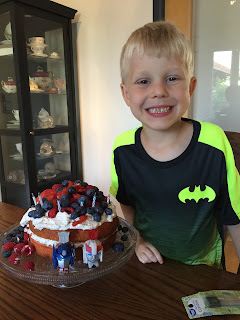 His dinner request was hot dogs and french fries (which is also his only dinner request ever) and his cake request was strawberry with frosting. Last year it was the same and the pink frosting from the store was disgusting so I just did a whipped cream frosting this year. He wanted a transformer cake but also wanted berries on top so we just got a few little transformers to put on the side. Again, he loved it. 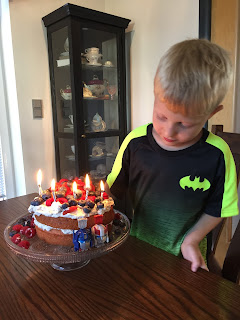 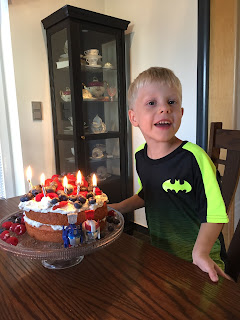 I was really nervous because the ONLY candles I had were trick candles I bought on accident. He was a champ though and laughed a lot with them coming back on. 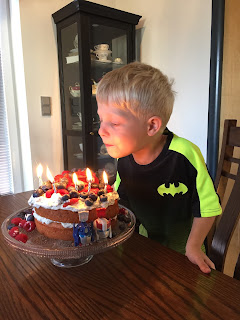 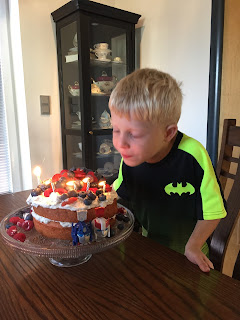 So he's finally six. He's still my baby though and is still pretty attached to me. He LOVES to cuddle and crawls in bed with me a few times a week in the mornings. When he's hurt or upset he wants two things - mom and his ree's. His blankets - still called ree's. He is such a boy - wild and hard-headed (literally) and active. He loves sports and his favorite clothes to wear are athletic gear. Mostly I think because they're comfortable but he loves shirts with numbers on them like jerseys and stuff. He really can't read or write yet and is easily frustrated by trying because he is also a perfectionist and wants to get it right right away. But his speech is coming along really well and he has loved being in kindergarten and having friends to play with at recess and in class. School has been good for him socially especially since we don't have any Americans around us to play with. He does not enjoy our travel exploits I think but is a good sport and always excited to stay in a hotel for some reason. He loves Germany - he has German flags, he loves the food, and he's very conscious that we don't speak like them which I find funny. He adores both of his sisters (and is taller than they were at 6 and has almost caught up to Abby now) and gets very upset when he is not included in their playing. He is a happy boy and we love him a lot!
Posted by Wonderful Whittacres at 10:51 AM