Where do I start?  Poor William.  Three years old is definitely not the baby and yet that's what Abby calls him constantly.  He's the youngest so he gets all the hugs and kisses (I think a double dose because of missing Aaron), but he's starting to turn "boy" and not want hugs and kisses.  He wants to do everything that his sisters do and honestly, pretty much can.  We always measure the kids on their birthday and he is taller at 3 than Abby was so she'll probably get overrun pretty quickly.

William doesn't really have any friends.  He spends his life with mom doing girl things and going places for the girls so his friends are their friends.  And all of their friends are on vacation!!  His birthday fell on Sunday and I didn't want to throw a party anyway so we invited over the guy who is probably his favorite person ever - his nursery leader.

Now Chad, the nursery leader, really only volunteers in the nursery because all of their leaders except one have moved or had babies.  But he really has taken it over.  The nursery right now is mostly boys and Chad lets them rough-house with him to no end and has started a nursery dodgeball league that mostly consists of beaning the kids in the head with under-inflated dodgeballs.  William LOVES it.  In fact, on the day of his birthday, he skipped his nap (again dang it) and was pretty cranky so Chopper turned on his favorite YouTube video -- an hour long video of different trains driving and making train noises.  He loves it.  And when Brother Fisher arrived for dinner and cake, William LEFT THE TRAINS BEHIND to go see him.  That's how much he loves him.

Presents this year were pretty predictable -- cars, helicopters, dinosaurs.  He is heavily into all three.  Although he doesn't play dinosaurs as much.  Dinner?  hot dogs, olives, corn-on-the-cob, tater tots, CAKE.  All year poor William has had to suffer through everyone else's birthdays -- watching them open presents and blow out the candles.  He tries to do both.  As soon as we set that cake down in front of him he went for the candles and we had to make him wait until the end.  He did good though. 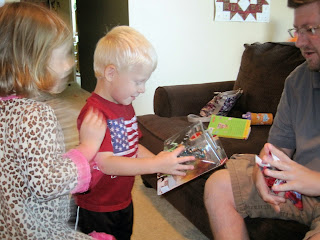 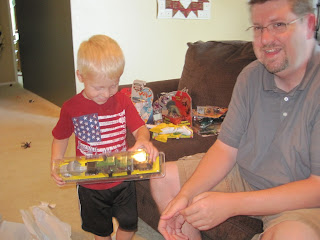 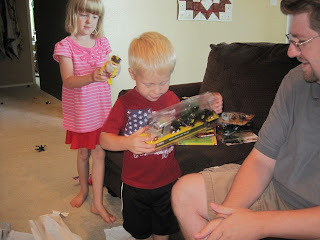 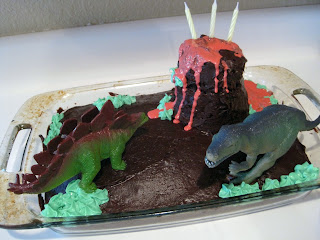 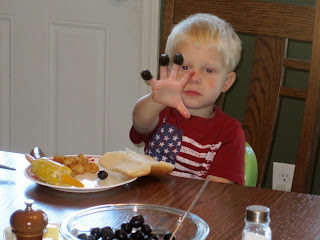 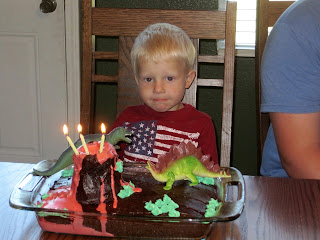 No smiles!!!  This was the best I could get.

And some fun videos.
Ok that's not a birthday video.  A friend of mine gave us their playset -- her boys have grown out of it.  It took a lot of work to get it apart, over here, and built back up, but the kids have loved it and for the 4th of July we did a little waterslide with it!

So things about William on his third birthday -- His talking has improved SOOOOO much!  He's still not saying his K's and hard C's (so ok is oh-hay and cars is hars) but he's speaking pretty much all the time.  A lot of it is fairly unintelligible, especially to people other than me, but he's doing it.  He reads scriptures at night with us (we pick the shortest one for him and go word by word) and more of his personality is coming out with his words.  Speaking of personality, he doesn't like to share AT ALL and is very boy -- active, loud, stinky (wet dog when he's sweaty -- it's amazing) but he can be so sweet and is quick to apologize.  He still is a major mama's boy and loves to cuddle with me, his blankets, and his milk but if daddy's home and doing work around the house then I am nothing!  He loves to be outside and he loves tools.  He has really enjoyed putting that playset together!!  He doesn't carry his blankets around everywhere anymore but still wants and needs them.  He has also gotten attached to Pluto (a stuffed animal) and needs him for bed now as well.  He is sleeping in a twin bed and occasionally asks me where his crib is but hasn't had any problems.  I think he fell out the other night but we cuddled and he went right back to sleep.  We tried to potty-train and he doesn't care so we stopped but he hates having a poopy diaper and he HATES being sticky.  The boy can be covered in who knows what and if his hands are sticky there is no end to the whining and crying until it's taken care of.  He loves cars, planes, trains and playing on the tablet or my phone and will steal them to watch movies.  He is still white blond but I've noticed a few random dark hairs!!  Not sure what that means!!!

I think that's it for now.  I love this boy and I'm grateful to have him.  He's a sweet sweet boy, oh LOVES to be read to, fun to be around.  Happy birthday William!!
Posted by Wonderful Whittacres at 8:46 AM No comments: