OK I just like the word "cacophony".  But it is so appropriate.

On New Year's Eve we spent the evening with some friends from church.  We had pizza and set off fireworks in their backyard.  We were a little worried about the legality, etc. of the fireworks but could hear the booms of a few others so figured it was ok.  The kids had sparklers and the dads set off some great Roman candles and fountains and a fantastic finale piece.  Then we went home and went to bed.  After all, we live in a small town so if the locals shoot off fireworks it shouldn't be too big of a deal.

Au contraire.
I should say that in German.
Andererseits.
I actually don't really know if that's correct but we'll go with it.

About 11:30 I wake up because of the booming.  Chopper's still up so I go downstairs and tell him he really needs to come to bed (we teach a primary class in the morning), and go back to bed.  But I can't sleep.  At 11:45 I give up and go to the window.  And it's amazing.  We live on a street behind the main street.  In at least two places on the main street (one pretty much directly in front of us), they're setting off fireworks.  Then there are some going off behind us.  And some on our street.  I went outside and took some video -- it's terrible quality but just constant booming, explosions, and the bells pealing madly.  We were in the heart of it all.  It was amazing.  And these are fireworks shooting into the sky and exploding with color -- near professional grade!

Chopper and I have witnessed some great fireworks over the years but this was unlike any I've personally seen -- I think because it was all around us.  The finale was spectacular and then really it kept going after that!!  And we're not the only ones.  Apparently, Germany is big into New Year's and exploding things.  We appreciate so much more the songs "I Heard the Bells on Christmas Day" and "Ring Out Wild Bells" but you have to add the fireworks to that last one.  I don't even know how to describe it.  It was fantastic.

But now is silence.  The kids started back to school yesterday and today and tomorrow have a 2-hour delay because of snow.  It is wonderful to get up slowly in the morning, make a decent breakfast, kids play a bit, then send them off to school.  Especially because I didn't have to drive them -- they get on a bus (with a German driver so I think he knows how to handle the weather) and off they go.  It was quiet at home followed by snowman making and snowball throwing.  Such a good day.  And now we have the silence of snow and darkness.  I love the silence of snow.  I'm tempted to bundle up and go for a walk except that I don't want to do it in the dark. 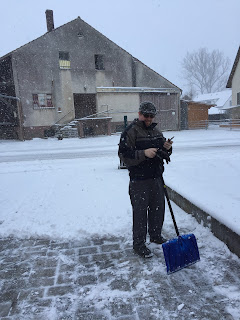 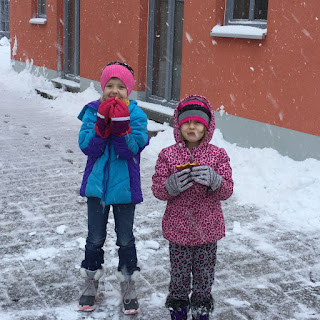 The kids played in the morning and then had to change out of wet clothes before school.  Yes we have snow pants but they're a pain when you're just in the yard and can change when you get cold! 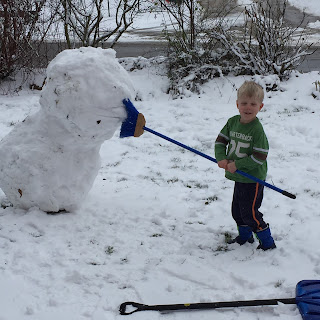 We built the body of the snowman before the girls left for school and throughout the day it gradually leaned and leaned until it fell over.  William did try to push it up with the broom -- didn't work so much. 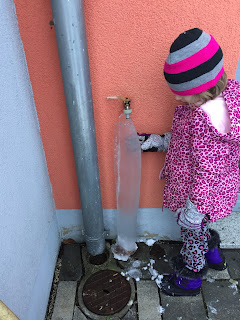 Our outside faucet that drips and the giant icicle it created. 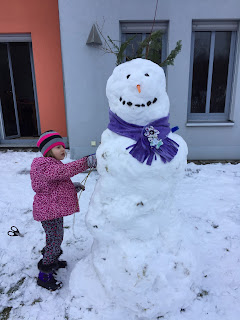 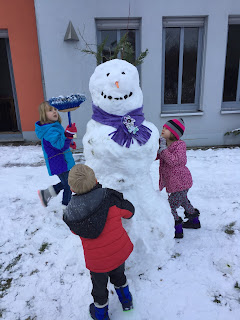 Again with the broom? 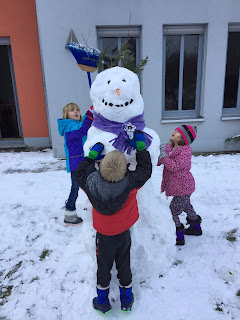 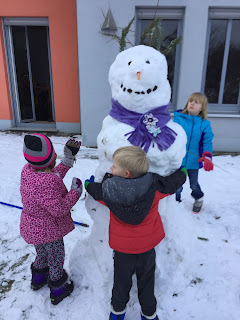 Chopper added the eyebrows and Megan posed it picking it's nose.

Posted by Wonderful Whittacres at 11:08 AM No comments: