Yay Easter baskets!!!  We do ours on Saturday.  I like it a lot better because that way they can enjoy them and get candy crazy and not have to calm down for church.  We kept it pretty simple this year though: some books, one small toy (cars for William, Palace Pets for Megan, and Octonauts for Abby) and then of course the candy. 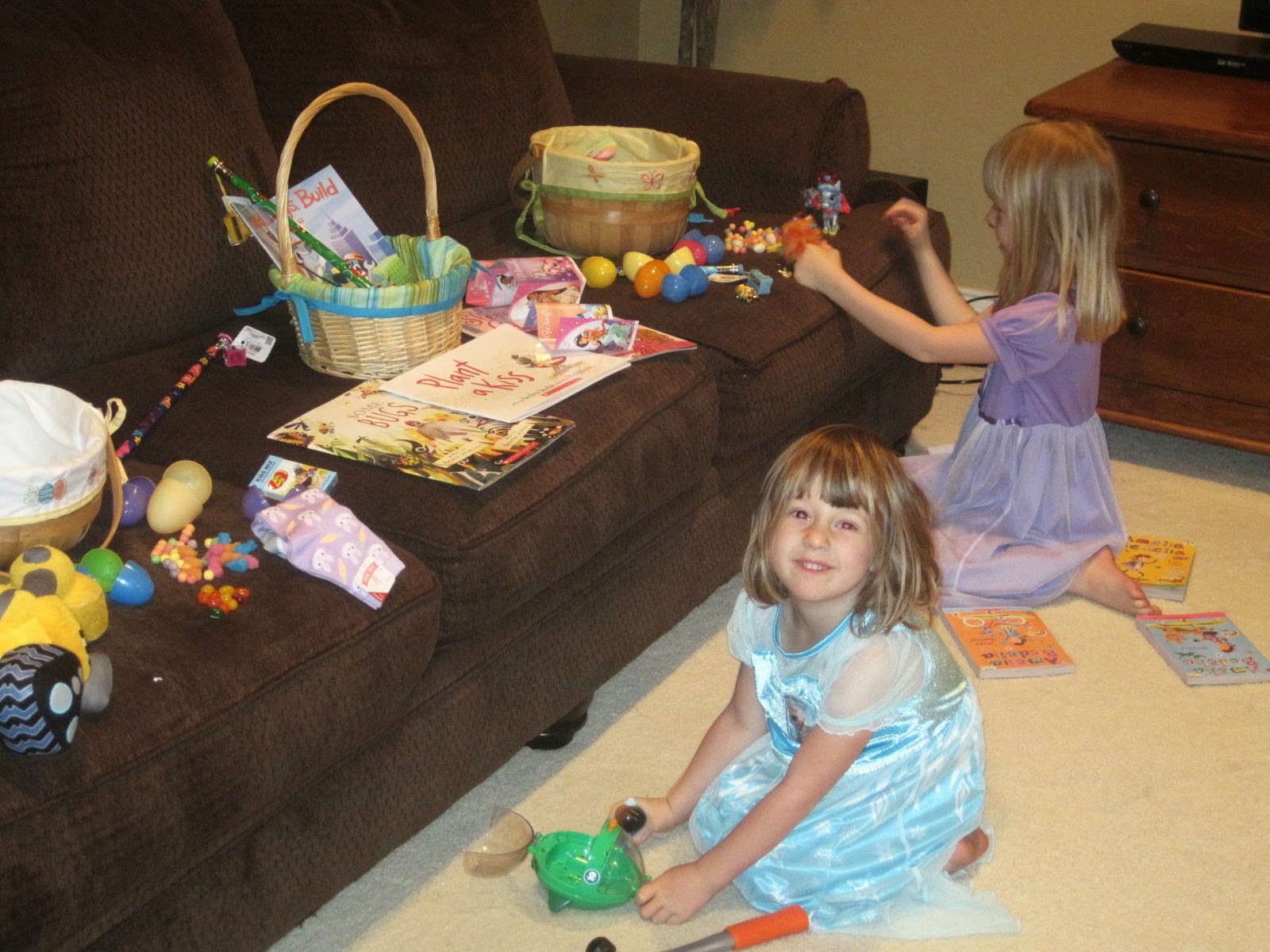 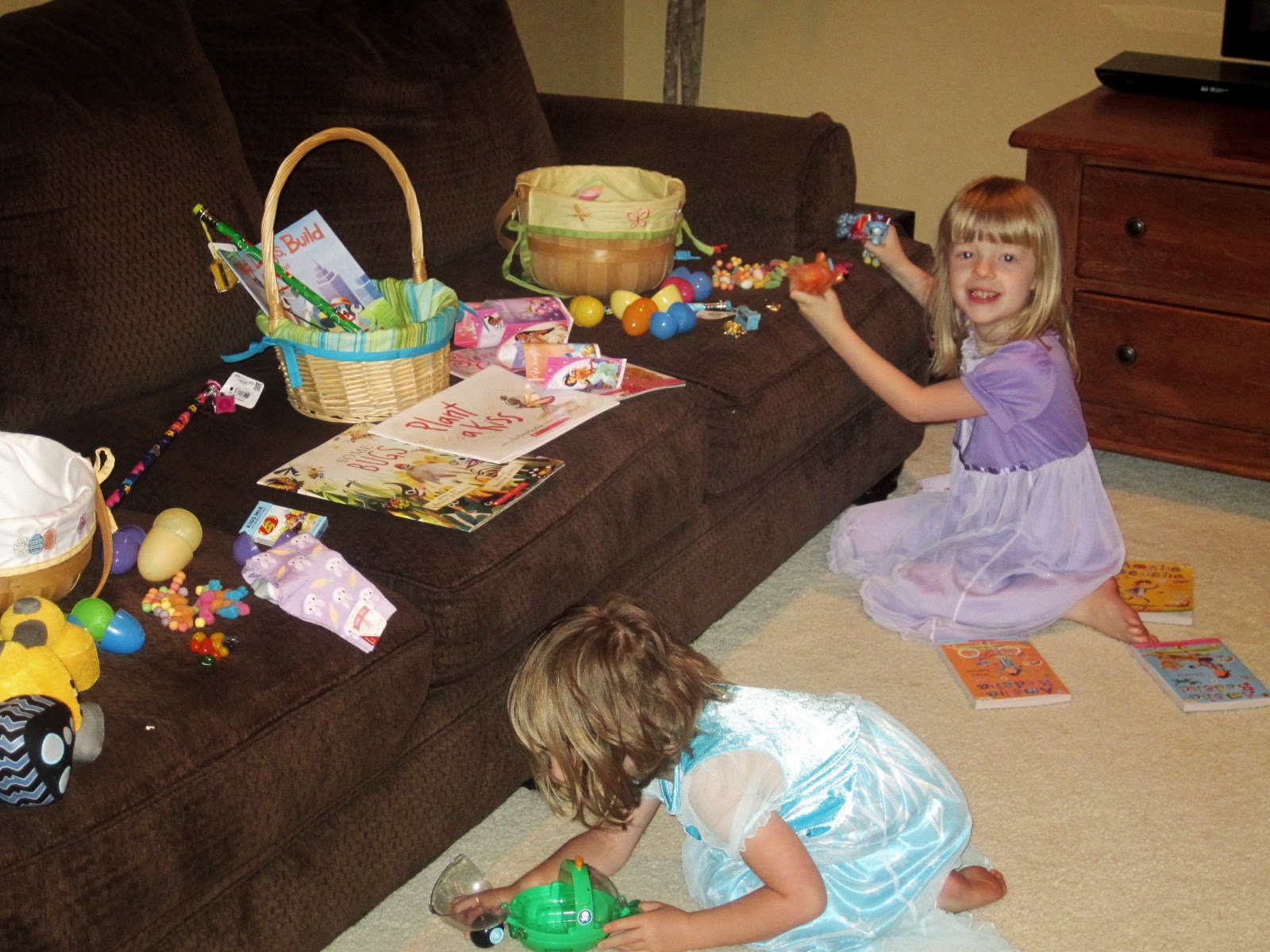 Conference went well, in part because they had those new toys in addition to conference bags.  I think I actually heard most of it myself!!!

A few weeks back a friend of mine added me to a Facebook group for gardeners and I laughed and laughed.  You see, I don't garden.  I don't enjoy it at all.  I'm of the same mind frame as my dad -- live in a condo with no yard.  Of course I like a yard for the kids but Chopper maintains it.  And I do love nature and the outdoors.  I just don't want to take care of it.

Anyway, one day she posted a picture of an amazing fairy garden made in a broken terra cotta pot.  It was awesome with beautiful plants and whimsical tiny houses and furniture!  And I fell in love!  Because in all honesty I am still about 10 years old at heart -- I still like to dress up, play dollhouse, etc.  I get way more into it than my girls sometimes but oh well.

So we planned a date and prepared.  I bought wooden birdhouses for the girls to paint.  Megan did hers, I did the other.  I found miniature garden fairy accessories and managed not to go crazy (but I did get some cute stuff).  Abby and I bought flowers and then I decided to throw some herbs in so that it would be a useful garden and it would make me look good (ha!).

So today we planted. 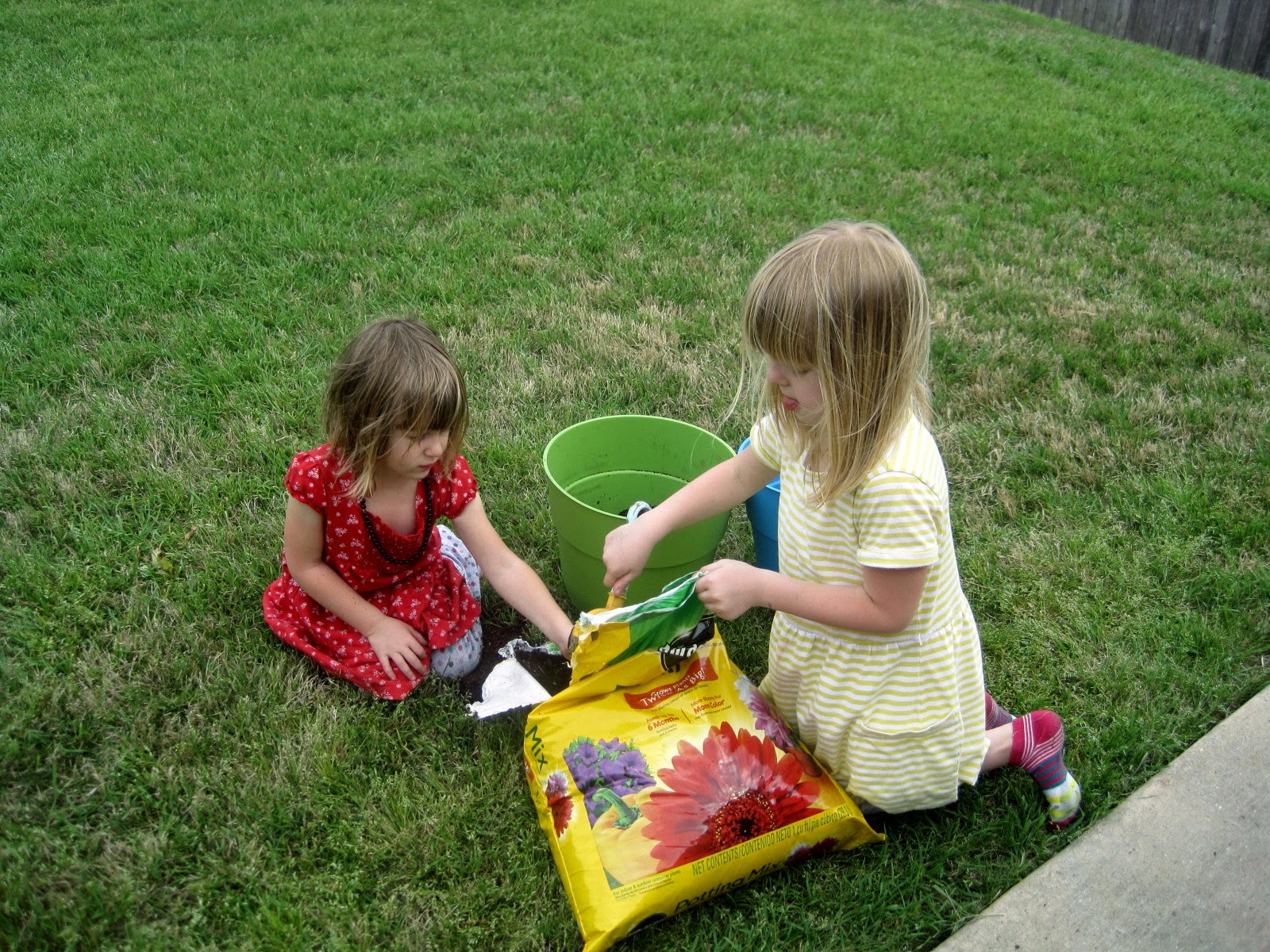 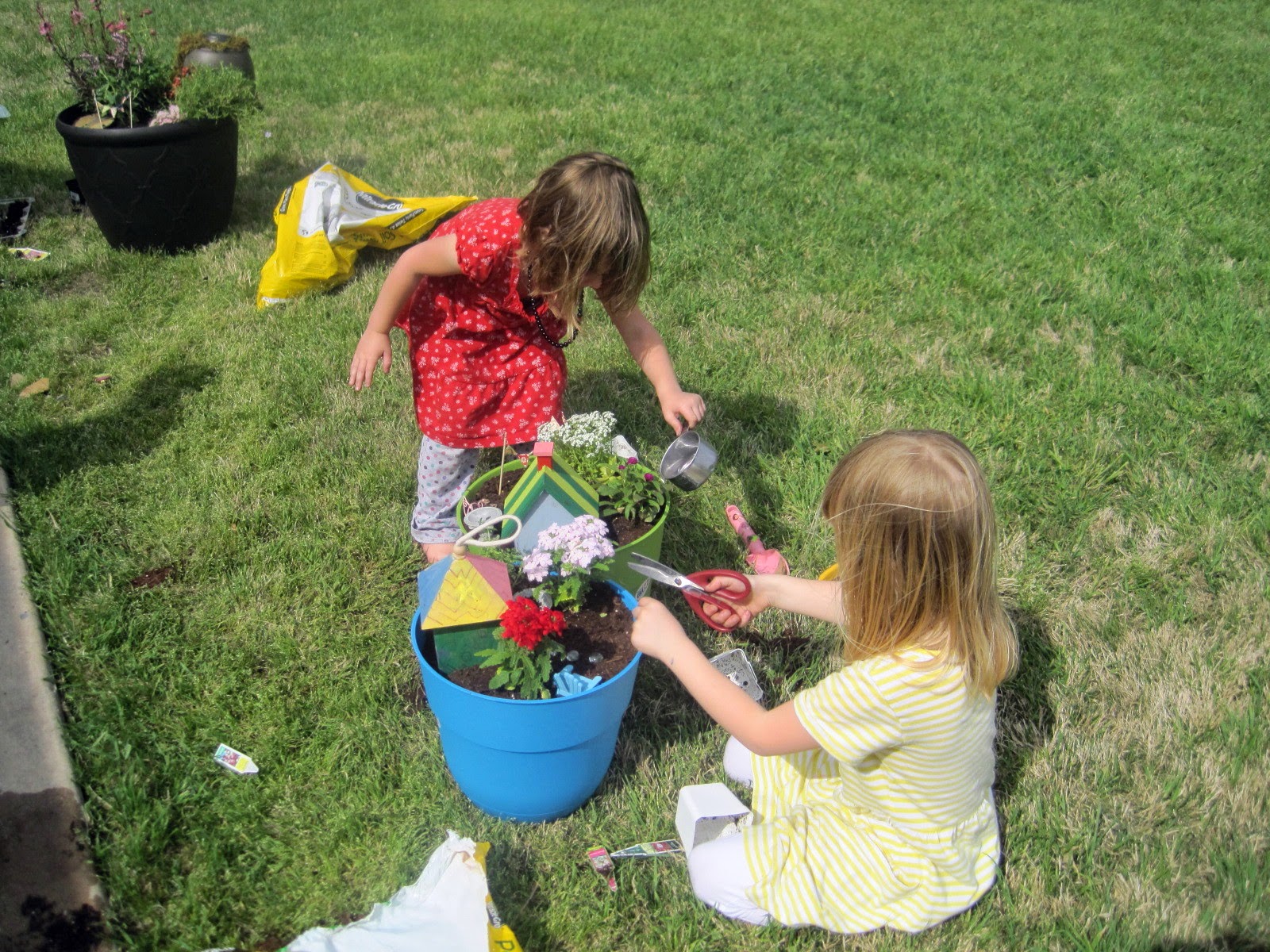 We only used 3 plants per pot and they're pretty crowded with stuff so I need to get ANOTHER one to plant the rest of my herbs and see how long I can keep them alive.  I just don't ever remember to water . . . 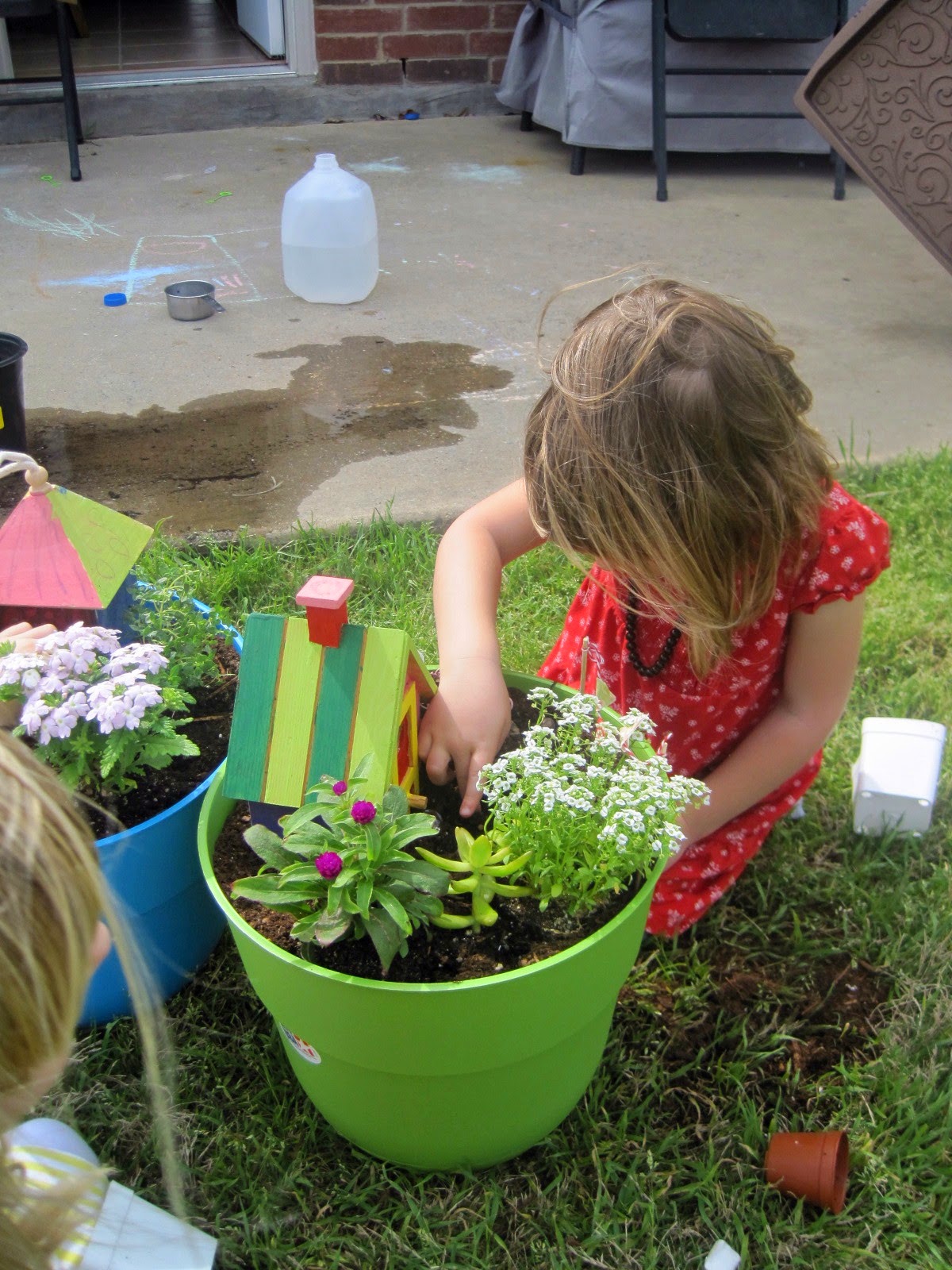 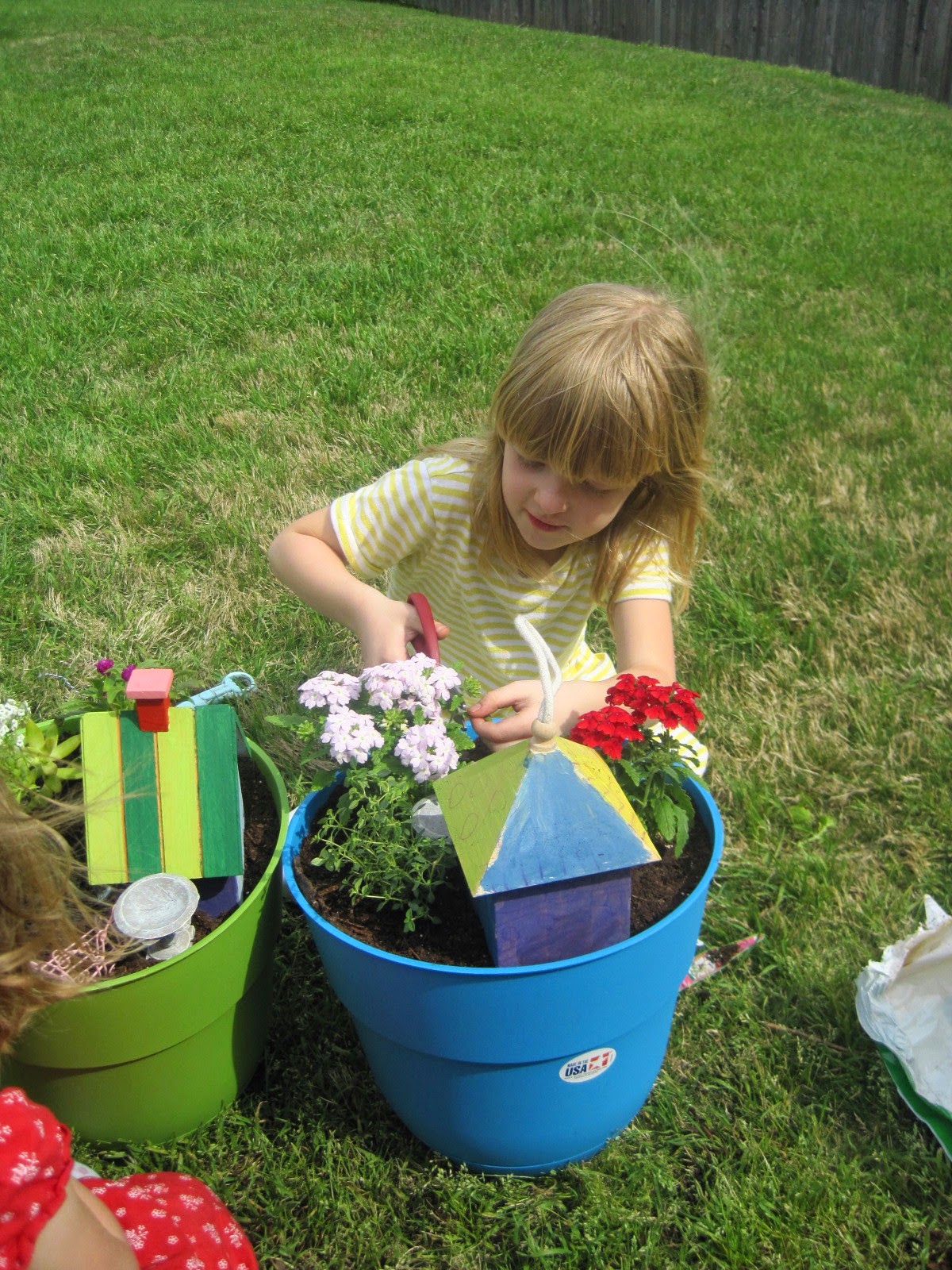 Megan insisted hers needed to be trimmed back to make more room.  I should have gotten bigger, wider pots really. 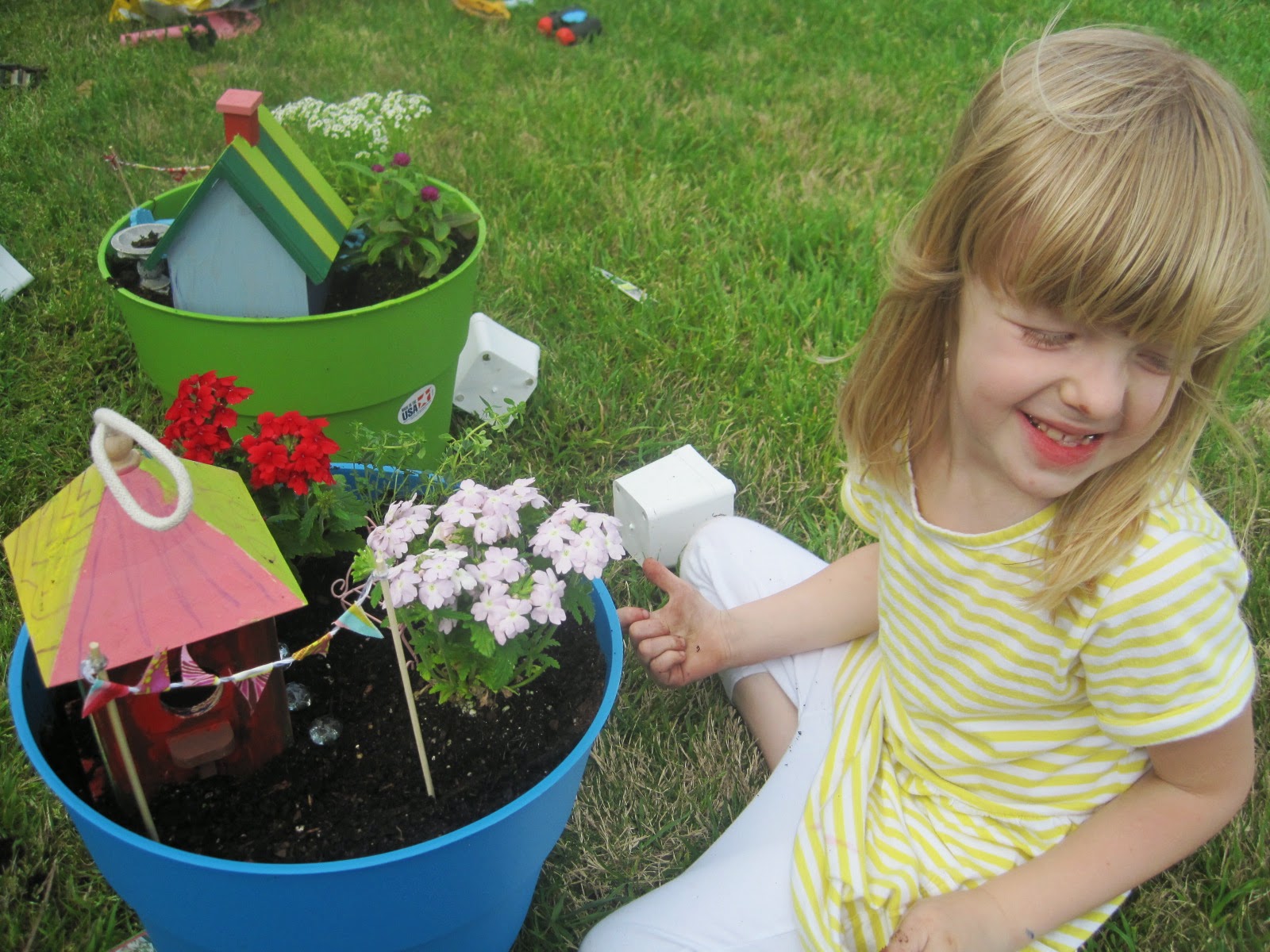 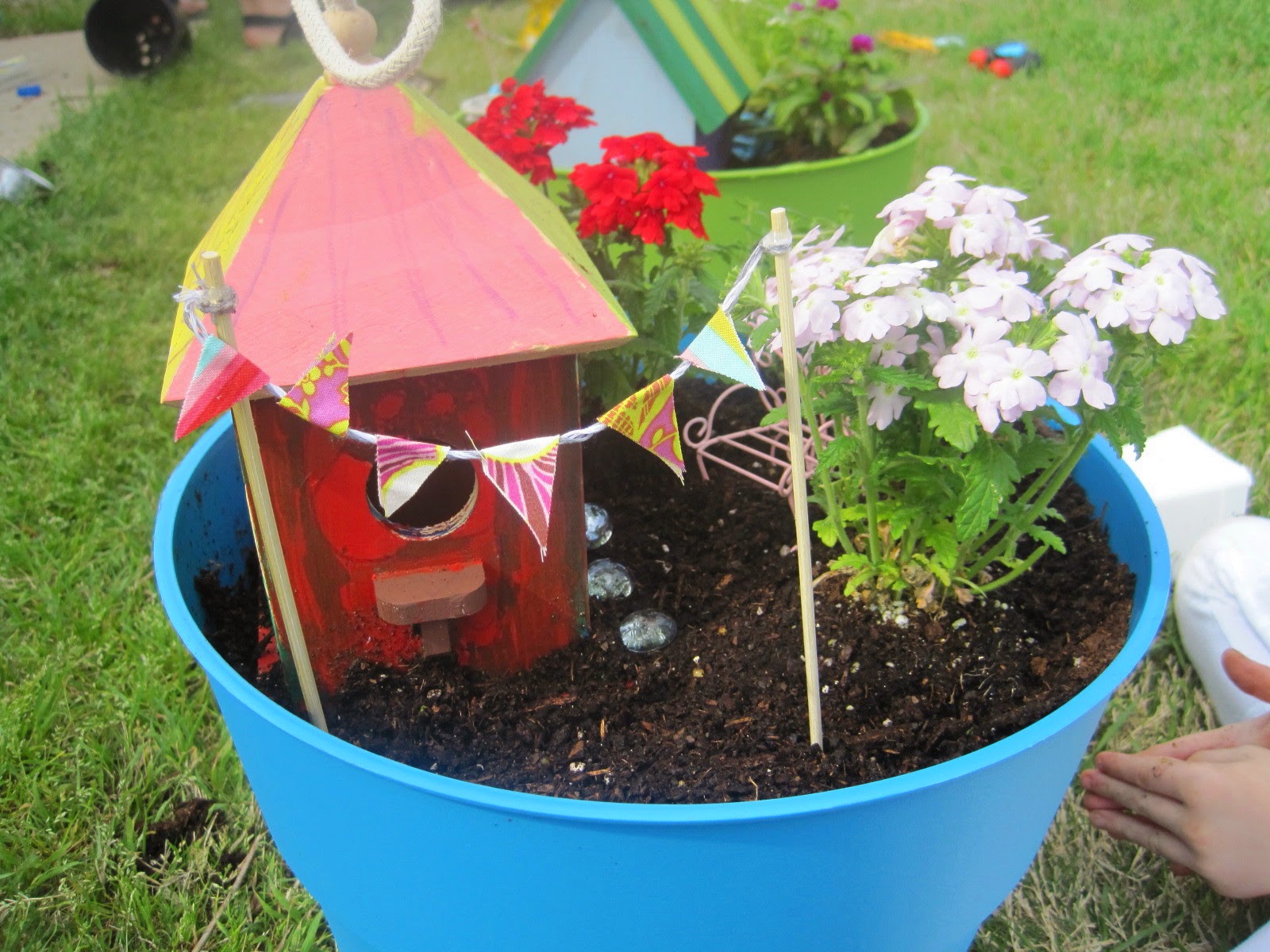 This is Megan's -- she painted the house and I made the garland (because I just can't help myself!!!!) 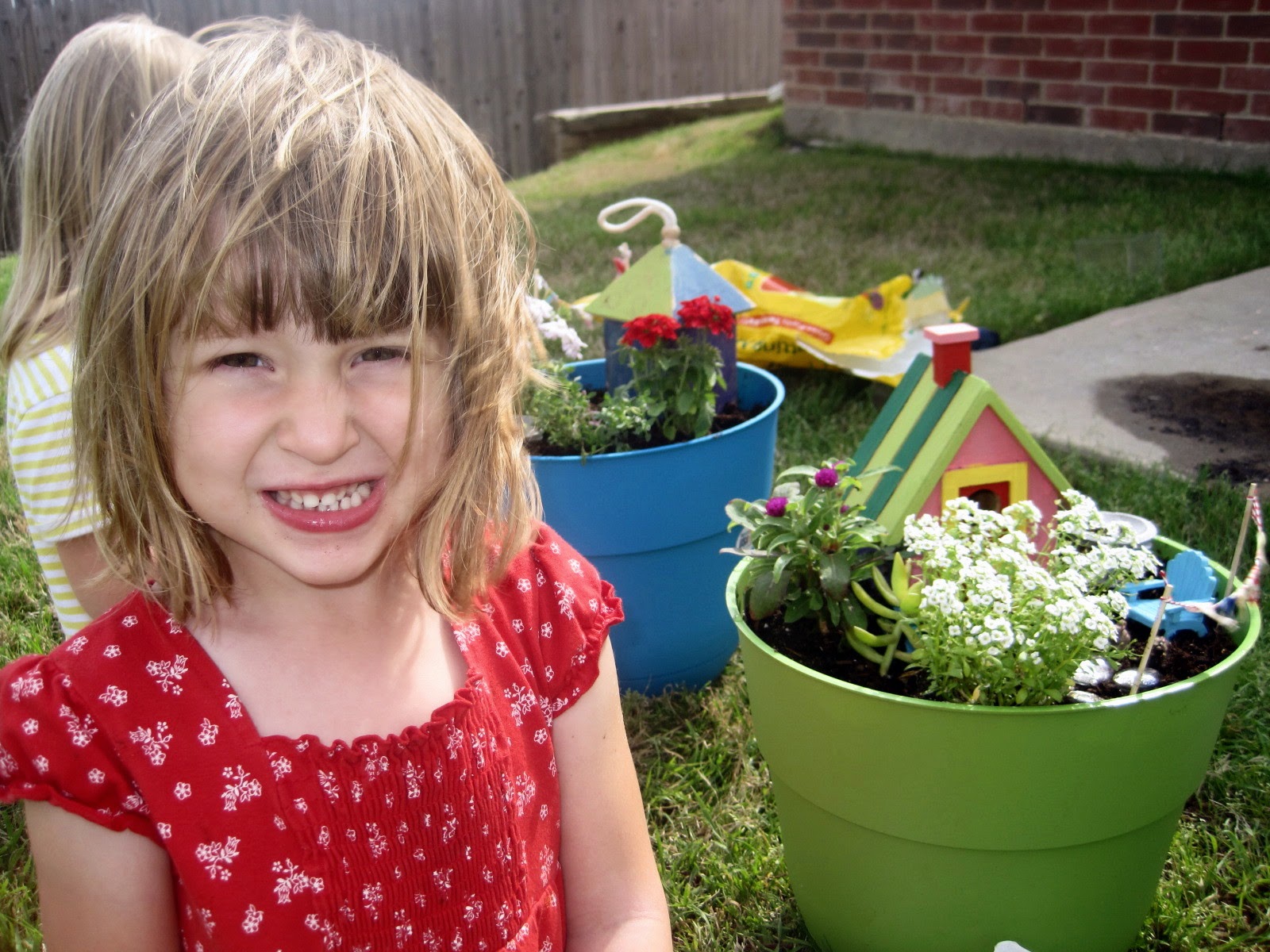 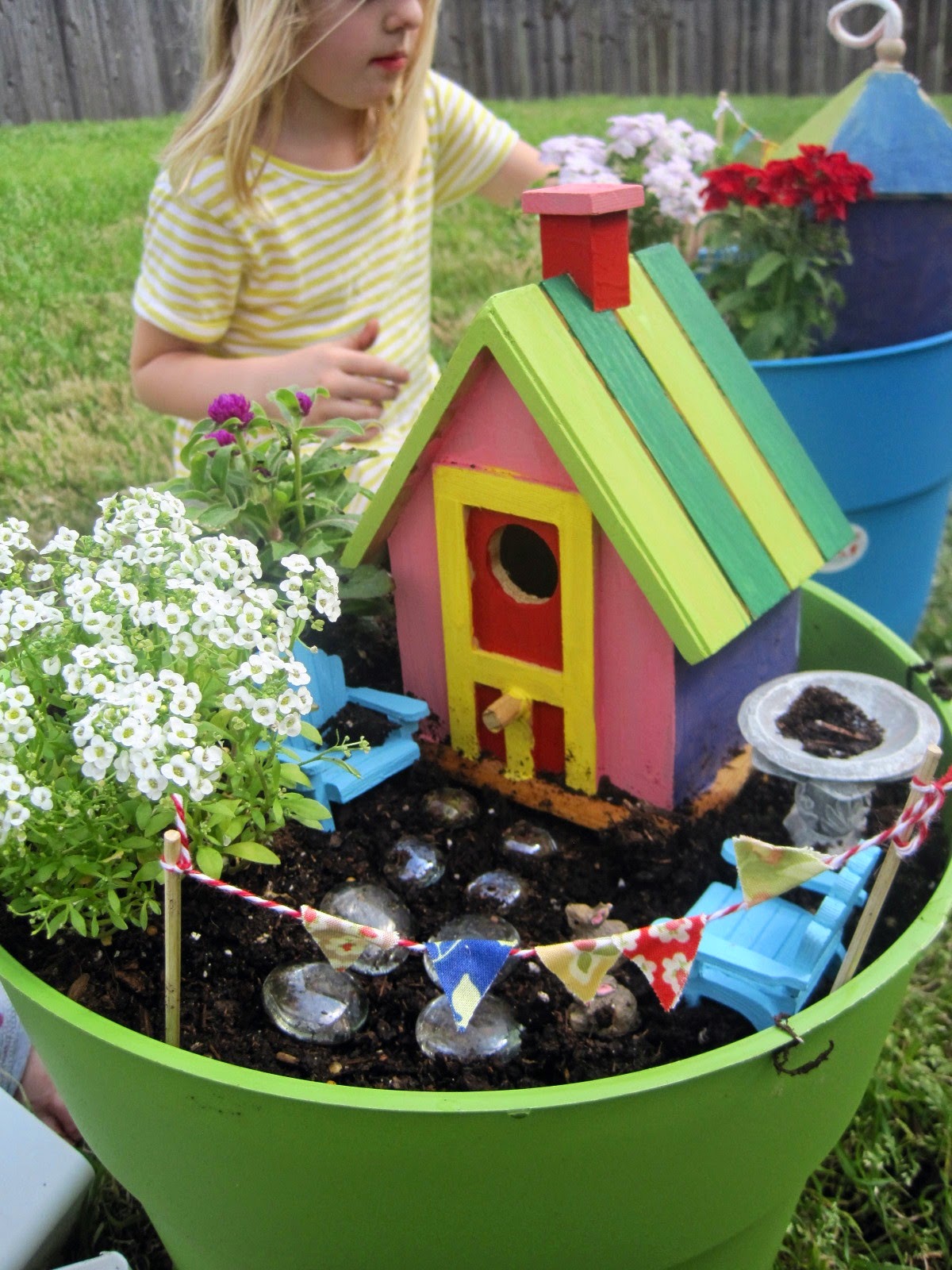 This is Abby's -- I painted the house.  Fairies love bright colors right?!?!

They turned out adorably.  Megan wants me to buy a bridge so that they can put the pots next to each other and the fairies can go from one house to another.  In fact, we have a decent sized willow stump that I told her I wanted to put a door and windows on and make it LOOK like a fairy house and she said no because the fairies wouldn't actually be able to get in.  She believes in fairies and believes they will come to visit now that we have houses for them.  I love that.

This could get blown out of proportion if I have to get another pot and then another house for that one and a bridge to connect the three and on and on and on.  But the girls are excited about it, I'm hoping we can keep stuff alive and claiming that now I'm a gardener.  Which I'm not.

This feels like such a big deal to me and I can't figure out why. Maybe it's because she's also registered for kindergarten now and will be gone next year.  That just leaves William and I in the house and I feel like that will be very different.  Plus, I will no longer be outnumbered.  I mean yeah, William still equals like four children but technically, I won't be outnumbered.

I waited to post so that I could get pictures of her birthday party yesterday and then I didn't take any.  Mommy fail!

Originally her party was going to be last Friday but Abby got sick so we postponed it.  But the phantom fever was gone by Saturday so we went to the Arboretum as a family and then celebrated at home with cake and ice cream (strawberry cake and strawberry ice cream -- that's mommy's girl!) and presents.  Her reaction to this one was the best:

She tends to barrel through presents and then love them after she's opened everything, but she has been waiting SOOOOO long to sit in a booster seat that she was pretty thrilled to finally get it.  And honestly, she barely makes the weight requirement and may still be a little under the height requirement.  I'm not sure about that one.

Singing happy birthday was the best -- I should have taken video of THAT.  William sang along and about the time that we approached the end of the song he started crawling onto the table to get better access to the cake to blow out the candles.  Fortunately, we held him back and Abby got to blow them out herself.  Before she did though, she loudly declared, "I wish for peace in the world!!"  Ahhh, that's my future beauty queen!

We planned her rescheduled party for Wednesday and the plan was to have it at the park but it RAINED.  I kid you not.  We have had really wet weather lately!  So at the last minute it came to our house.  The kids played, we sang and ate cupcakes, and then we had an indoor Easter egg hunt.  I think Abby enjoyed it. 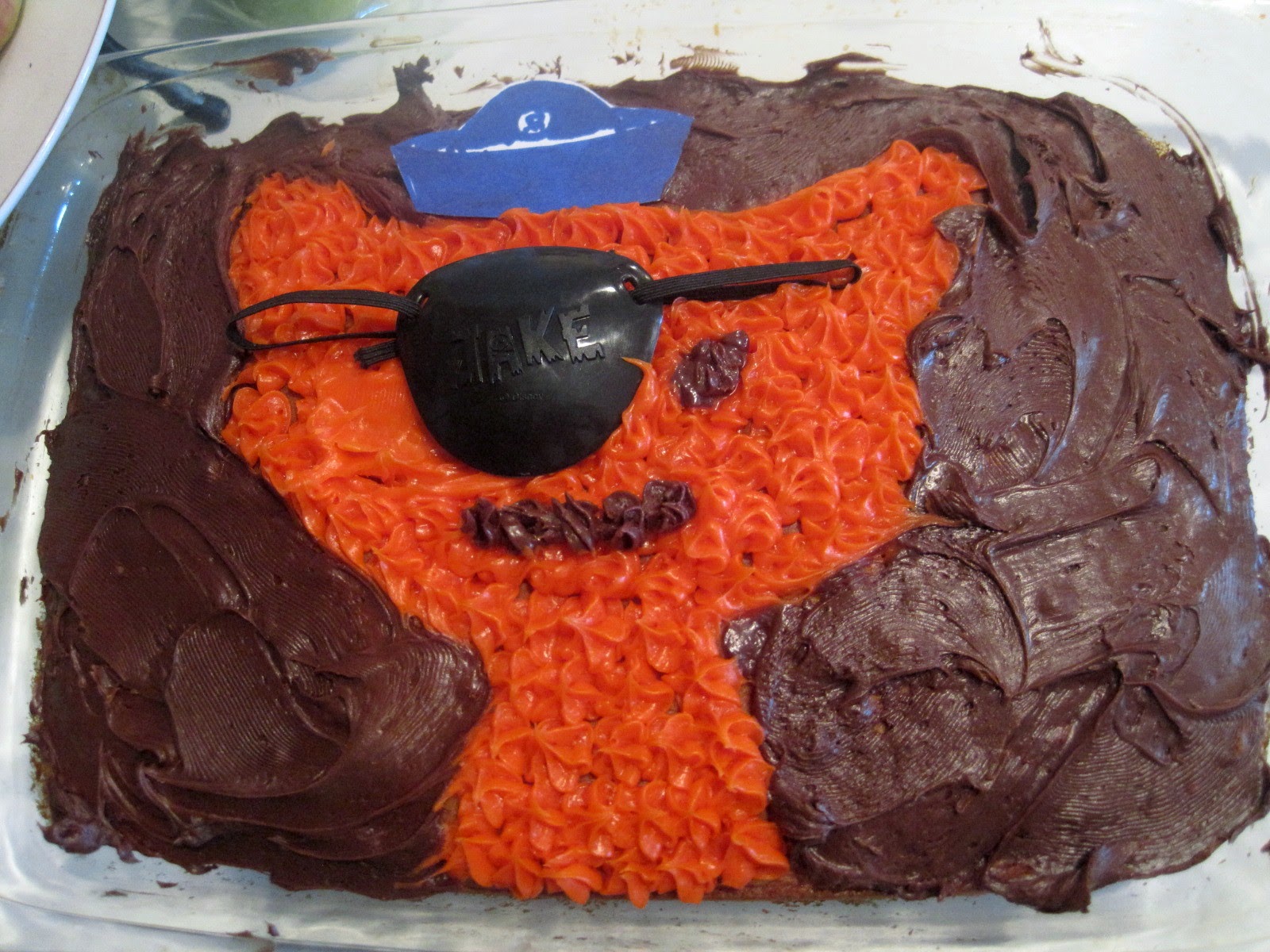 Oh this is my horrific Kwazii cake.  Abby has really gotten into a show called Octonauts.  It's about these animals who live under the ocean and help sea creatures.  This is the real Kwazii: 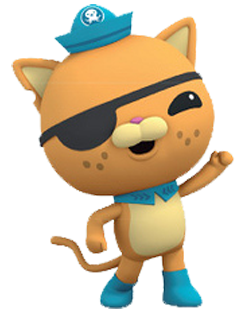 SO I think this officially marks the end of my cake decorating career.  From here on out it's frosting and sprinkles.  On the bright side, Abby gave me a big hug and told me she loved her Kwazii cake!! 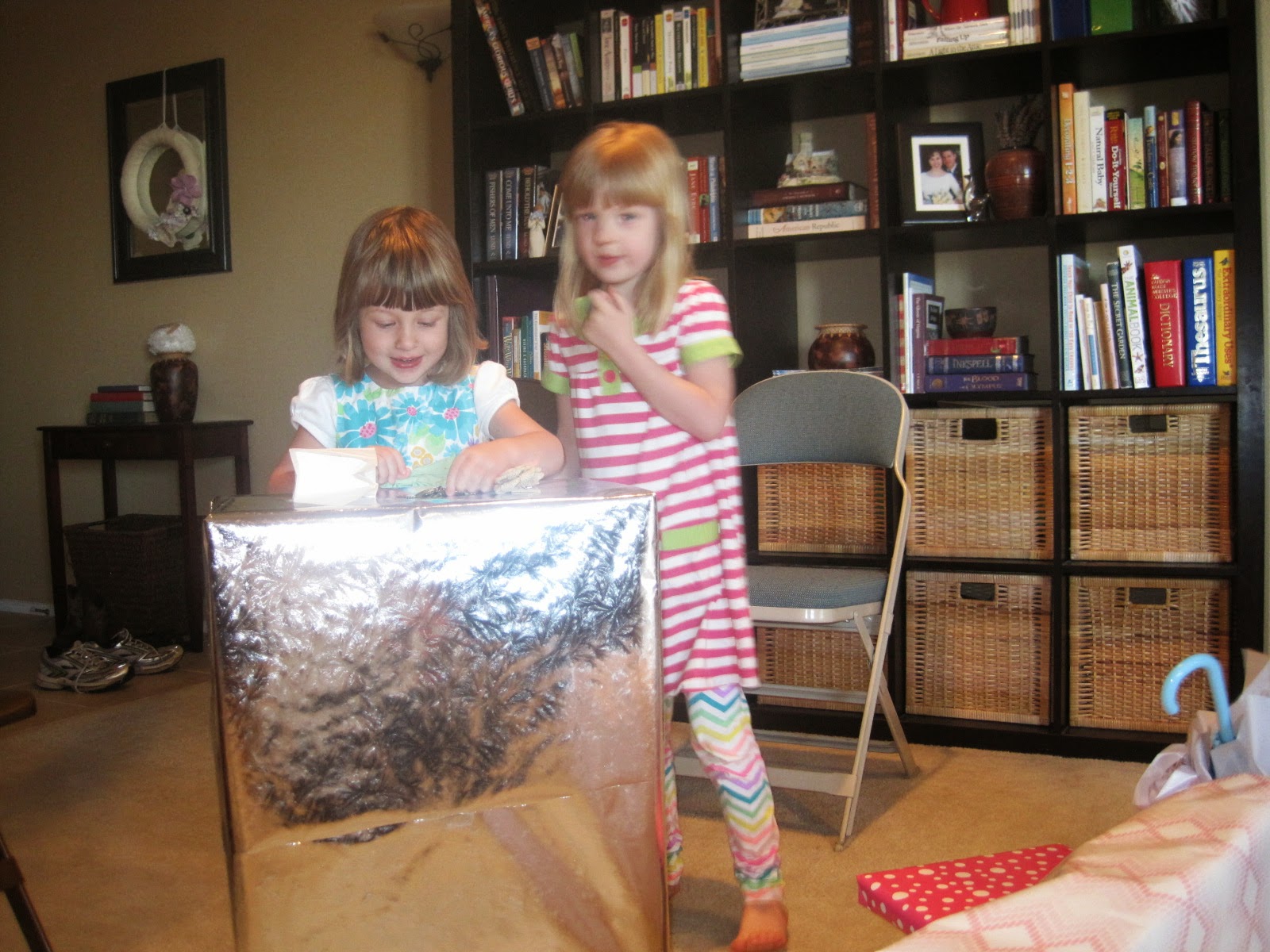 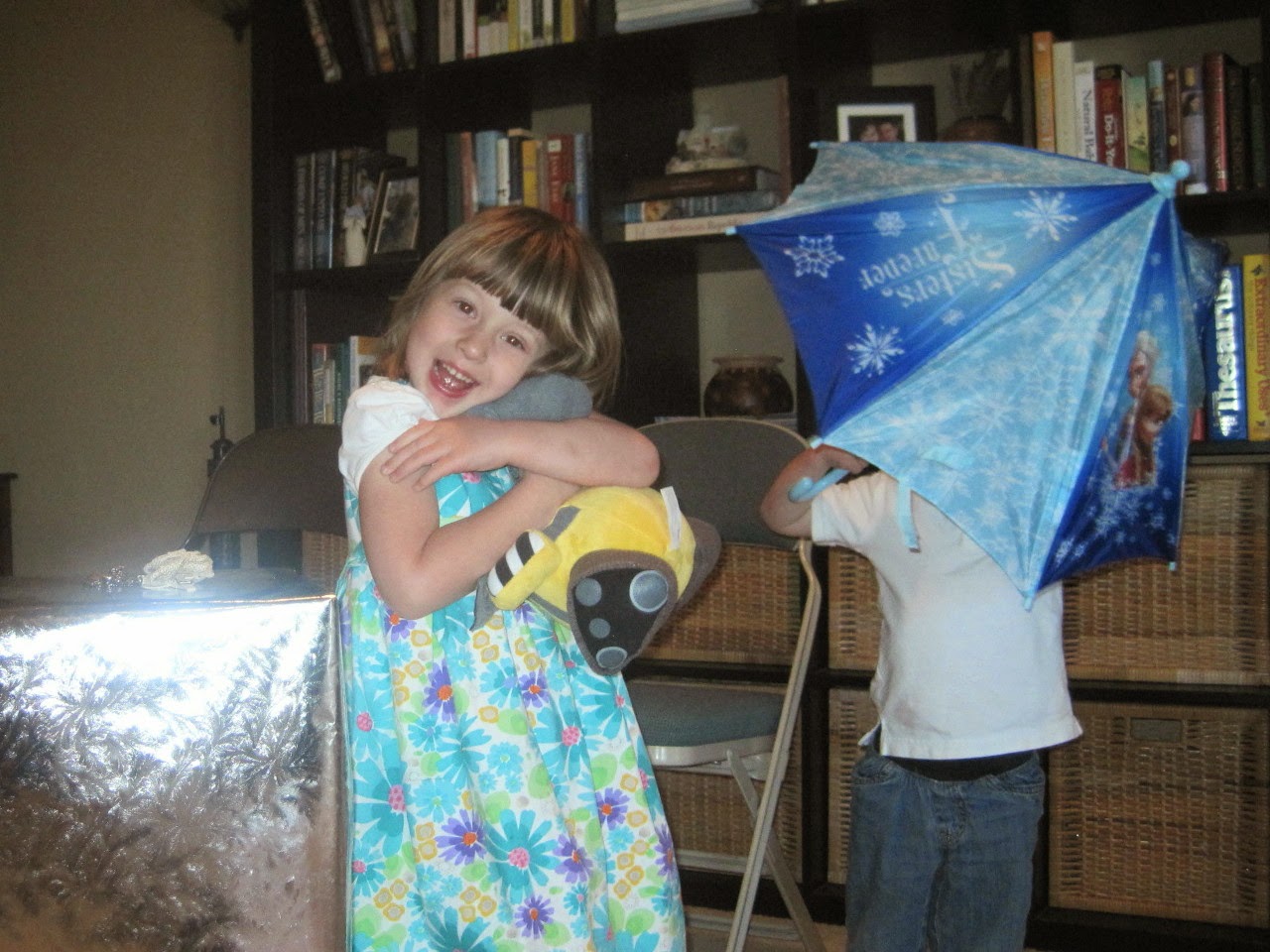 I found another WALL-E.  Technically he should probably replace the one that Grandma gave her for her 3rd birthday and who is falling apart but we now have WALL-E the 1st and WALL-E the 2nd.  And she now sleeps with them both.  There was one night that she actually wanted Kwazii (Grandma got her a stuffed Kwazii) INSTEAD, but she's gone back to WALL-E.  Mostly the original.  Add in junior and Kwazii and that's fantastic!  Also, she wanted an umbrella.  Worst present ever.  Mainly because William wants it too. 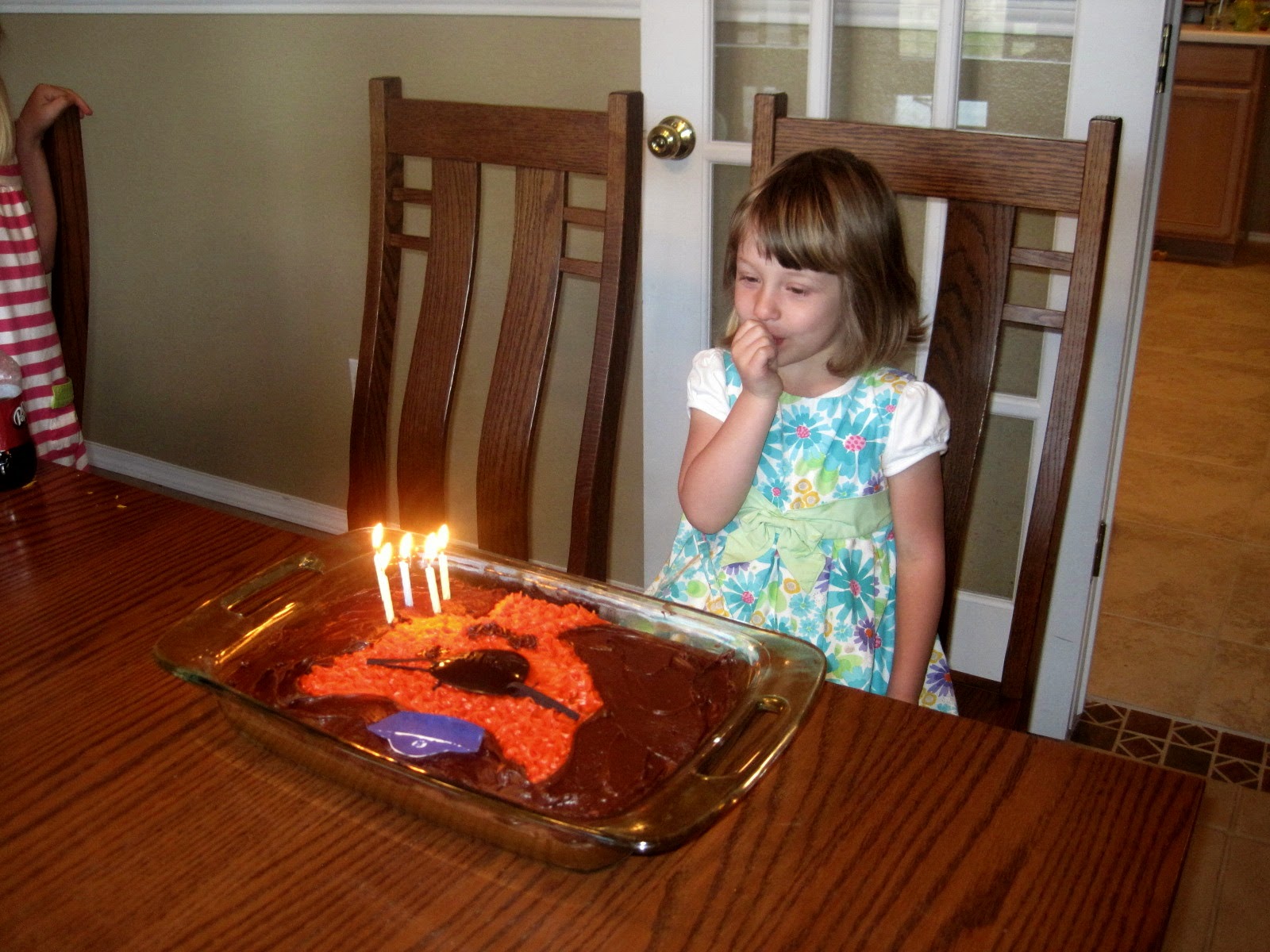 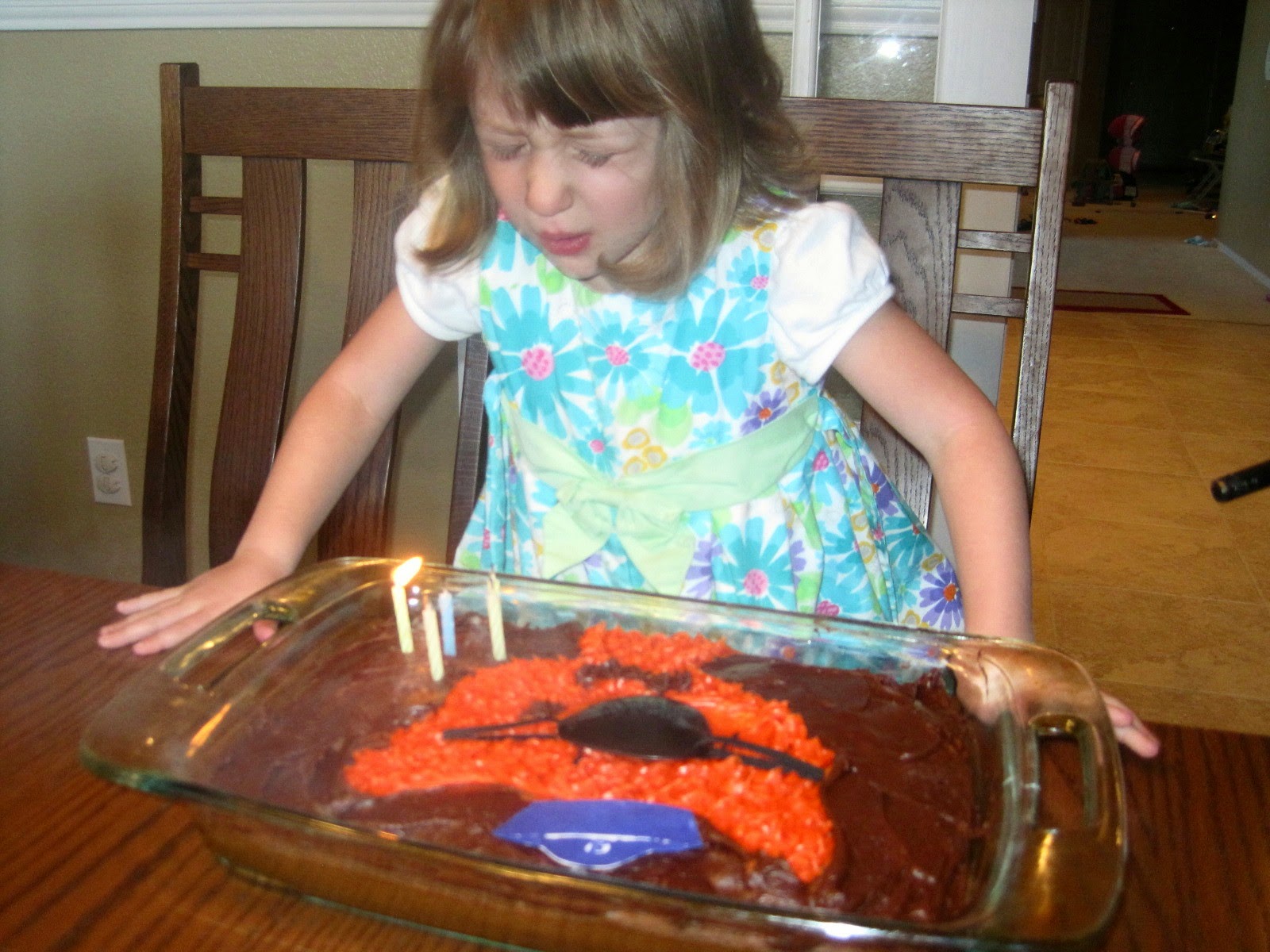 Oh my friend took this picture at the party.  Light is bad but you can see that I have my hand in front of William's mouth to keep him from blowing out the candles.  Poor kid.  July can't come fast enough for him.  Me?  Well, three is usually harder than two so I think I can wait. SO now that she's five, what can I say about Abby?  Hands down her favorite thing to do is watch tv.  Yes, we watch too much and she gets really upset if I declare a no tv day.  She can handle it, but the announcement usually brings tears.  She loves Apple Creek preschool and is very excited to go to kindergarten next year and get to take a lunch to school everyday.  However she will always be hungry because I'm pretty sure that she won't be able to stop talking long enough to eat lunch in the allotted time.  She is a pretty constant talker and is a happy, sweet girl.  She is cuddly, so cuddly, and loving to her friends and MY friends.  Everyone loves Abby.  She shares so generously everything that she has and still wears the sparkly boots pretty much every day.  They'll disappear here in favor of flip flops soon but I think that's only because they're hot in the summer!  She says the BEST prayers.  I love hearing her pray because she goes on and on and says wonderful, sweet things.  She always asks for Aaron to come back and usually says something about Jesus coming back too.  She prays to stay in bed and eat all her dinner and pretty much anything that comes to mind that she has to do that day.  It's awesome.  She's awesome.  And she's five!!

Posted by Wonderful Whittacres at 6:41 PM No comments: